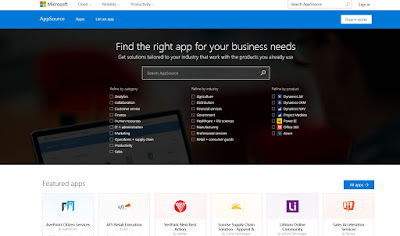 The announcement garnered quite a bit of response in the press, including the Wall Street Journal and Forbes.

Although all the details of Dynamics 365 have not been announced, the essence is bundling and un-bundling of products and features from Microsoft's extensive Dynamics catalog.  Microsoft is enhancing the integration of Dynamics products with Office 365, and moving customers to Office 365 for authentication and management of Dynamics solutions.  One can easily imagine Microsoft progressively dropping support for on premises versions of some products -- perhaps sooner rather than later.

At the same time, Microsoft will be breaking some products into their component parts in order to allow a customer to mix and match the functions that they need to perform.  Dynamics CRM, in particular, has grown along with Microsoft product acquisitions and new developments, adding nearly a dozen new modules or products to CRM.  The Dynamics 365 announcement calls for a more a la carte approach to CRM, so customers could adopt sales force automation without a customer support capability.

In addition to new bundling and de-bundling options, Microsoft's announcement mentions two products which offer connections to "glue" Microsoft (and third party) products together -- Microsoft Flow and PowerApps. Flow connects web services to one another and let's you script business processes and publish templates to connect the web services you need for your business.  For instance, you could use MailChimp for marketing automation but integrate with Dynamics CRM. PowerApps is a tool to build web or mobile apps without writing code, connecting structured and unstructured data sources and even using mobile hardware capabilities such as cameras and GPS.

Pricing has not been announced for Dynamics 365, but one might expect modular pricing as well as the option to install only the modules that the customer wants to use.

Microsoft requires third party products on AppSource to use Azure authentication and to use more than one Microsoft product, such as combining Dynamics CRM and PowerBI.

Up to now, Microsoft has not had a single, consolidated app store for line of business solutions but has had many sites with product listings and scattered app stores with limited support for purchase transactions.

I doubt that anyone still harbors doubts about Microsoft's commitment to cloud computing, but if so this announcement is another indication of Microsoft's firm product direction to their cloud.