SharePoint is a content management system with a portal framework, a search engine and document management. It is a general purpose collaboration tool and may be applied to intranets, extranets and public websites.  SharePoint is based on the concept of lists, which are comparable to database tables. Lists are used for a large number of SharePoint features such as calendars, document libraries, content lists, news items and more.   Lists may be easily created by end users within their sites, and they do not have to be centrally managed so that these lists may differ from one site to another in a SharePoint implementation.


Dynamics CRM is a database application for tracking a number of entities relating to sales, marketing, customer service and contracts along with related activities and workflow.  Dynamics CRM exposes the data model to administrators as entities and attributes (tables and columns).  They can easily view all entities and attributes, as well as all locations such as forms where the attributes are used.  The data model of Dynamics CRM in inherently centralized compared to SharePoint’s model where centralization is optional.


The following figure shows how SharePoint and Dynamics CRM map to features commonly required in line of business solutions.   It shows which features are available out of the box and which require custom development. 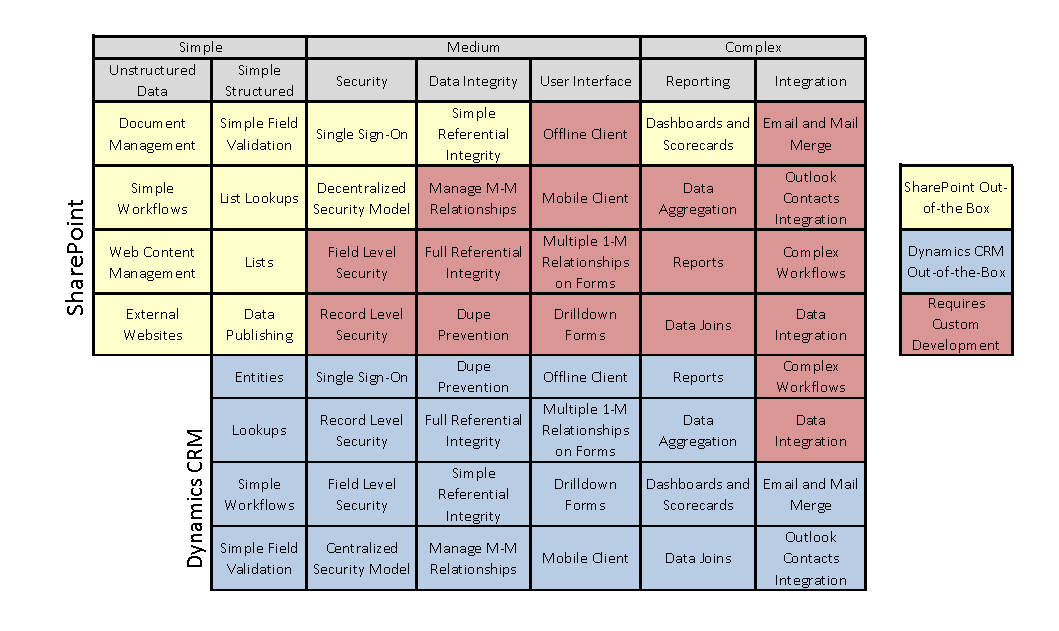 February 04, 2015
The Digital Accountability and Transparency Act enacted in May 2014 calls for making spending data available in open, standardized formats to be published online.  It is a continuation of transparency initiatives and lessons learned with experiences such as grants.gov, the 2009 economic stimulus under the Recovery Act and the spending site USASpending.gov.

Government grantees will have significant new administrative responsibilities.  Many organizations that were tracking grants in spreadsheets or documents will have to adopt more sophisticated automated grant management systems such as Microsoft Grants Manager to keep up with reporting rules.

For profit companies will lose some privacy as a result of this law.  Grant recipients will be required to disclose information including officer salaries.

Continued improvements to publishing grant opportunities such as grants.gov may make it easier to find grants. These reforms together are designed to improve the effectiveness of grant prog…
Read more

October 10, 2017
One of InfoStrat's most popular solutions is Dynamics 365 for Government Contractors (GovCon).

Here are some answers to frequently asked question on this solution:
Can I add new fields to the solution?  -- Yes, the solution is fully customizable and you can add your own new fields to any form, view or report.Does Dynamics 365 for GovCon work on mobile devices?  -- Yes, Microsoft offers mobile apps for all the most popular platforms including iPhone, iPad, and Android phone and tablets.Does Dynamics 365 connect with bid data systems such as Deltek and Onvia?  -- Some information services, such as Onvia, offer integration with Dynamics 365.  Others require third party solutions such as the InfoStrat integration with Deltek GovWin IQ.What do customers typically customize for their unique requirements? -- Not all contractors follow the same steps in the capture process.  Most clients will tailor the business process to add or remove steps in order to match their sales methodology.  Of…
Read more

The announcement garnered quite a bit of response in the press, including the Wall Street Journal and Forbes.
Although all the details of Dynamics 365 have not been announced, the essence is bundling and un-bundling of products and features from Microsoft's extensive Dynamics catalog.  Microsoft is enhancing the integrat…
Read more