In June 2016, Microsoft released the preview of its Flow workflow productivity app.  This app allows you to create transactions that span multiple software products in a similar way to competitors IFTTT and zapier.  For instance, I might want an incoming email to save attachments to SharePoint or Dropbox, or generate a notification by text for an email sent from a key contact.

You can start with a Flow template and customize it to your business needs. Flow doesn't require programming and is simple to configure.

What is even more exciting to me is that Microsoft offers an industrial strength workflow app for business customers.  Flow templates can be migrated to Azure Logic Apps  which allow developers to build complex and scalable workflows, and to create new connectors to systems that are not covered out of the box.  Logic Apps was released into production in late July 2016. 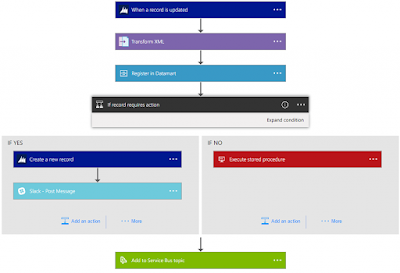 There is even a BizTalk Server connector in preview now.  Often workflow conditions and parameters are more complex than can easily be captured in a configuration, so having support for code will make many more scenarios viable for Logic Apps.


Although workflow software has been around for many years, no vendor has really claimed a leadership position or set a standard for the entire industry. Microsoft has the opportunity to do so with these products and related cloud offerings (Azure and Office 365).