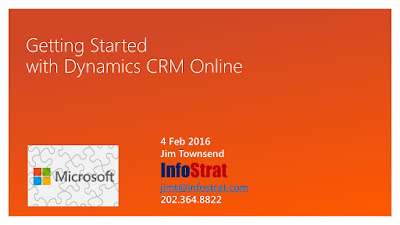 For the full presentation, you can watch the video:

Here are some highlights from the discussion:


The best way to learn even more is to go ahead and subscribe to Dynamics CRM Online.  Free trials are available.

December 17, 2019
I met Lou Guercia when he was president and CEO of Scribe Software, the leading CRM integration tool.  Scribe was acquired by TIBCO Software in 2018.  I recently reconnected with Lou and learned about ScreenMeet, the company he joined as chief operating officer.   The following is a description of the product provided by ScreenMeet: ScreenMeet is a cloud-based remote support tool designed to integrate with Dynamics 365 Customer Service. By enabling customer service and IT support organizations to address critical technical issues directly from their CRM or ticketing platform, it streamlines the process and provides a fully browser-based support experience. You can also use ScreenMeet with other CRM products or even on its own without a CRM. Here is a short video demo of ScreenMeet with Dynamics integration: ScreenMeet - Cloud-based Remote Support Integrated with Dynamics 365 Customer Support Once integrated with a Dynamics 365 CS organization, the ScreenMeet widget appea
Read more